Adventures in cooking (a continuing series)

During the NFL playoffs, I like to link my cooking to whoever's playing that day.  Since the first game was Arizona at New Orleans, I went with chicken machaca and Mexican red rice from The Border Cookbook. 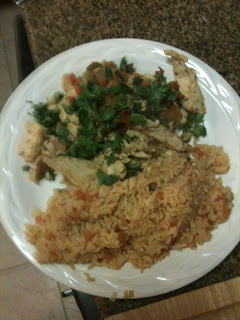 I went shopping earlier in the day and thought I had all of the ingredients, but the rice recipe called for a mild New Mexican chile powder that I forgot to buy.  It called for a tablespoon of the chile powder so I substituted about 3/4 of a tablespoon of cayenne pepper instead.  While the resulting rice was edible, I think it was a little spicier than the editors intended.  And it made for an eye-watering meal when paired with the chicken dish.

There are some nights I'm glad I only have to cook for myself.
Posted by PhilCatelinet at 4:23 PM